Be on your guard

Every accident causing harm is preventable but some are simply inexcusable. Far too many entanglement fatalities and serious injuries occur through lack of adequate guarding or guards being removed while plant is operating. Here’s
the site of one recent fatality in Australia.

What happened?
Last November, a worker was fatally injured when he became entangled in the rotating tail drum of a conveyor belt. The tail drum guard had been removed to allow rocks to be cleared and the conveyor was operating with the guard removed when the incident occurred. 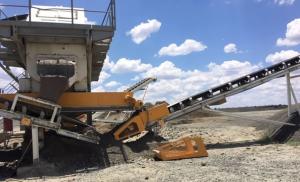 In the most recent incident at the company’s Vaughan Road site in Rotorua, a worker had his hand caught in machinery used to de-stack timber when trying to reinstate a dislodged chain. He lost the tips of his middle, index and little fingers.

What’s really appalling is less than three months earlier a worker’s hand had to be amputated after it was drawn into a wood planer at the business’ Thames plant. WorkSafe inspectors found the guard supplied by the manufacturer sitting in a cupboard above the planer; there was no system of regular inspection to ensure guards were present and functional.

This photo appeared recently on real estate websites. Note the exposed tail drum on the crusher. For whatever reason people do not see a problem with this.

We need everyone in the extractives sector to understand that operating plant without appropriate guarding MUST NOT HAPPEN.
If the likelihood of a substantial fine does not phase you, have a serious think about the personal impact of a fatality at your workplace. The Australian entanglement cost the life of 21-year-old father of one, Connor Milne. This tragedy will have a lifetime impact on his family, fellow workers and owners of the quarry.